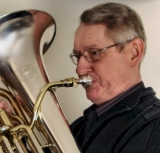 David Werden is currently living in Minnesota, working as a computer consultant and teaching tuba and euphonium. Since moving to Minnesota he has performed with Symphonia (America's Premier Large Tuba-Euphonium Ensemble), the Minnesota Orchestra, the Sheldon Theater Brass Band, was a special guest artist at the International Euphonium Institute, performed for the International Trumpet Guild, and has been heard on live national broadcasts of A Prairie Home Companion.

Copyright © 1996 - 2022 - David Werden Publications, all rights reserved.
Use of this site is subject to our legal terms and conditions
Page last modified:
August 4, 2016