What is the difference between baritone and euphonium? Euphoniums have a larger bore that is more conical. Baritones are smaller and more cylindrical. The complete answer involves three instruments, all in the key of B-flat:

(Also see this blog post for audio/video examples of the 3 types of instruments:
The Euphonium Family: Baritone, Euphonium, Double-Bell Euphonium )

When I was in high school, my parents decided to buy a new instrument for me to replace the student model I had been using. The music store showed me a top of the line King 3-valve "baritone." The salesman said it was a fine instrument, but if I was a serious player, I should spend another $80. For the extra money I would get not a mere baritone, but a genuine ***E*U*P*H*O*N*I*U*M***. When I asked what the difference was he explained that a baritone has three valves, while a euphonium has four. He also told me that a euphonium has a different bore, and sounds nicer that a baritone. I ordered the more expensive instrument.

This confusion of names may contribute to the somewhat anonymous nature of my chosen instrument. In the USA, the average man on the street doesn’t know what a euphonium is. This is partly due to a lack of exposure to the horn, but if he ever has seen one, it may have been referred to as a baritone, a baritone horn, a tenor tuba, or a euphonium. Also, the name baritone is sometimes confused with baritone saxophone or the baritone voice.

I have consulted over two dozen reference books to understand the distinction between these two instruments. These sources included dictionaries, encyclopedias, music dictionaries, and music texts. All agreed on the general definition of these two horns, although none offered anything as specific as measurements. They agreed on the following: a baritone has a smaller bore and bell than a euphonium, with tubing that is mostly cylindrical. Its sound is lighter and brighter. The euphonium has a larger bell and bore, and its tubing is mostly conical. It has a larger, darker, more powerful sound. Four well-known sources have characterized the distinction as follows:

These statements are sufficient to categorize the instruments now on the market, yet there is a noticeable confusion about euphoniums and baritones.

The Conn American-style euphonium fits very well into the range of measurements of the other traditional-style euphoniums, yet this instrument is more often called "baritone" than "euphonium." The Conn line is interesting in this regard. Their various models all share the same dimensions of tubing, bell size, and taper, but Conn has usually listed their most expensive model as "euphonium" and their cheaper models as "baritones." Other American companies have followed the same path, apparently feeling that the name "euphonium" justifies a higher cost and connotes better quality.

An almost humorous example of the confusion of definitions is found in the nearly extinct double-bell euphonium. This was an instrument with an extra valve to send the sound either to its large euphonium-size bell or to a much smaller trombone-size bell. The smaller bell gave it a bright sound, similar to a true baritone horn. To the best of my knowledge, this instrument was never called a double-bell baritone. The same instrument minus the small bell was (and is) frequently called a baritone. The inconsistency is that the double-bell version was able to approximate the sound of a baritone, while the single-bell instrument could only sound like a euphonium.

My own instruments are typical of the horns made by manufacturers from Europe and Japan. My euphonium has an upright-bell, side-valves, and a bore of .592 inches. This type of horn is seldom called a baritone. I also use an upright-bell, side-valve baritone horn. This horn has a .522 inch bore and a bell only slightly larger than that of a trombone. It possesses a much brighter sound than my euphonium. This type of horn is virtually never called a euphonium. The tubing of the euphonium is almost entirely conical. The tubing of the baritone is much more nearly cylindrical. The nature of the baritone’s bore can be demonstrated by pulling out the main tuning slide and reversing it. It will still fit into the horn reversed, but such is not the case with my euphonium'’ tuning slide.

While most agree on the names of my particular instruments, such is not the case with the instruments in many of our public school bands in the USA. They are similar to the Conns mentioned above, and generally have a .560 bore and forward-facing bells of about 10.5 inches diameter (although many are made with upright bells as well). Even a casual examination of the tubing will show that it is almost entirely conical. I believe the breed was originally designed to let a single instrument play both euphonium and baritone music. While the early samples of this type of "hybrid" instrument may have had a sound nearly centered between a baritone and a euphonium tone, the desire for a smoother, fuller sound has led the manufacturers to gradually change the instrument’s characteristics. The modern version have a sound very close to that of the European and Japanese euphoniums. They sound slightly brighter, but not nearly as bright as a true baritone horn. Also, compared to my own horns, their .560 bore is somewhat closer to the .592 euphonium than to the .522 baritone bore. 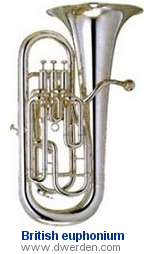 Notice the relative sizes of the bottom bows and the "throat" of the bell; notice also the continuous taper of the tubing of the two euphoniums.

Measurements aside, my experience from playing most brands of this bell-front breed is that they sound like euphoniums. There is an old saying that goes something like "If it looks like a duck and waddles and quacks, then call it a duck." These bell-front type instruments should certainly be called euphoniums. All the definitions I found would support this title based on the characteristics these horns possess. The fact that they are slightly smaller in bore and sound than the euphoniums commonly found in Europe and Japan certainly shouldn’t disqualify them from the title "euphonium." Consider the modern trombone. Most symphony players use trombones with large bores (around .547 inches) and large bells. However, many trombones are made with bores in the range of .500 to .515 and smaller bells. They sound somewhat smaller and brighter than their larger brothers, yet they are still called trombones.

Music publishers share the confusion. As a professional euphonium player I read a large quantity of music each year. Roughly 80% of the music I played was marked "baritone," and yet about 1% of it was actually intended to be played on a true baritone.

While it may seem more awkward to have to say "euphonium" instead of "baritone," let us help others get into the habit of using the correct names for these instruments. It is time to end the confusion. 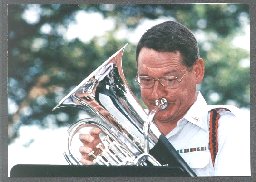 David Werden is currently living in Minnesota, working as a computer consultant and teaching tuba and euphonium. Since moving to Minnesota he has performed with Symphonia (America's Premier Large Tuba-Euphonium Ensemble), the Minnesota Orchestra, the Sheldon Theater Brass Band, was a special guest artist at the International Euphonium Institute, performed for the International Trumpet Guild, and has been heard on live national broadcasts of A Prairie Home Companion.

Copyright © 1996 - 2022 - David Werden Publications, all rights reserved.
Use of this site is subject to our legal terms and conditions
Page last modified:
July 20, 2017